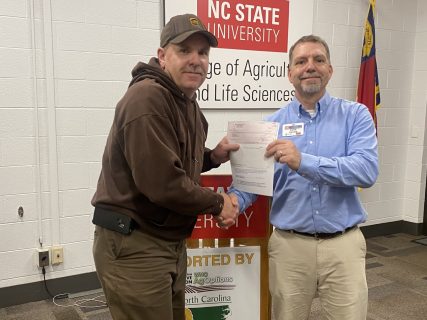 Starting in 2011, Scott began feeding his cattle spent brewers grain which led to finishing out cattle to supply meat to local restaurants in the Asheville area.

As demand for his beef has increased, so has his need to obtain more spent grains from local breweries. He currently gets grain from two local breweries, but uses trash cans to transport the grain to the farm 2-3 times a week.

His grant will be used to purchase a dedicated dump trailer which will save significant time and money and will allow him to transport more grain and expand his operation to increase sales.

Scott sells to multiple restaurants in Asheville, and having recently acquired a meat handling license, will be selling direct from farm to local customers in 2020.

WNC Agricultural Options is now accepting grant applications from farmers diversifying or expanding their businesses. With funding from the N.C. Tobacco Trust Fund Commission, WNC AgOptions is distributing a total of $216,000 to western North Carolina farmers in 2021. The... END_OF_DOCUMENT_TOKEN_TO_BE_REPLACED

Diversifying farmers in western North Carolina are receiving support to offset the risk of expanding and trying new ventures. WNC Agricultural Options awarded 40 farm businesses a total of $216,000 in $3,000 and $6,000 grants. Funded projects include one of... END_OF_DOCUMENT_TOKEN_TO_BE_REPLACED