The 2021 WNC AgOptions Grantees have been announced! Check back soon for a press release and more information on this year's recipients!

The 2021 WNC AgOptions grant cycle is closed.   Please check back in early February for the list of the 2021 grantees!

Leucobryum, Hypnum, Thuidium unless you work in an herbarium, these names may not be familiar to you. So, to clue you in (and perhaps help you out if you’re ever on Jeopardy!), these are all types of bryophytes. Still confused? We’re talking mosses here. – Mountain Xpress, June 2, 2010

Sometimes you have to look beyond the obvious to enjoy nature’s gifts. They hide in unexpected places, waiting for the patient observer to discover them. Take Leslie Henry’s backyard, for example.Welcome to the moss garden. – Carolina Home + Garden, Spring 2010

When Van Burnette wanted a drought-resistant crop to try on his 6-acre farm near Black Mountain, N.C., he decided on hops. The problem is, no one really know much about how the essential beer ingredient will grow in North Carolina, much less whether burgeoning interest in local brews and home brewing will translate into a sustainable market. – Southeast Farm Press, April 7, 2010

To bee or not to bee? For Marion man, it’s no question: AgOptions grant will help with Russian honeybee project

There’s been a lot of buzz about the decline of the honeybee population in the past few years. Bees face a lot of pressures in North America, including parasites, drought and invasions by Africanized honeybees. – The McDowell News, March 23, 2010

The WNC Agricultural Options Program recently awarded 42 farmers the seed money they need to complete a variety of diversification projects. This year’s recipients, who are sharing a total pot of $225,000, are selling locally raised meats at the WNC Farmers Market in Asheville. – Mountain Xpress, March 10, 2010

Tambra and Will Buford started a goat farm in Edneyville six years ago, planning to sell goat meat, then switching to goat’s milk. The Bufords sell soaps, lotions and cheeses made from the milk. Their Vineyard’s Edge farm was recently awarded a Grant Award: $6,000 grant to help build a cheese factory. – BlueRidgeNow.com Times News Online, March 9, 2010

Cowzilla may be the only local hops lover who didn’t make an appearance at the inaugural Hops Farm Tour. The huge feral cow, christened Cowzilla by Julie Jensen, co-owner of Echo View at Landfair Farm in Weaverville, may have been intimidated by the more than 100 growers, home brewers and beer lovers… – Mountain Xpress, September 30, 2009

There is help for farmers who want to diversify their farms. Grants totaling $225,000 are available to WNC farmers who are diversifying or expanding their operations in 2010. WNC Agricultural Options, which will award approximately 45 farmers in 17 counties and the Cherokee Reservation… – Yancey Common Times Journal, August 26, 2009.

Van Burnette’s land has been in his family for 200 years, and has been operating as farmland for a century. His ancestors were some of the first settlers in Swannanoa Valley. Today, Burnette is a pioneer in his own right, as one of the first [modern] farmers in Western North Carolina to commercially grow hops, an ingredient for beer. -Black Mountain News, August 20, 2009.

Maybe it’s a woman thing, to be able to feed your family. Maybe it’s the state of the economy or the world. but I have this incessant drive to learn how to do this,” Lauren Meijia tells me. – Western North Carolina Woman, August 2009

Harold Long is full-blooded Cherokee Indian and proud of his heritage. Through his well-known Cherokee pottery and his extensive traditional Cherokee vegetable varieties, Long is doing his part to carry on Cherokee traditions. – Southeast Farm Press, Wednesday, December 3, 2008

Four Jackson County farms have been awarded AgOptions grants to expand and diversify their operations. Vera Guise, Mike Creason, George Frady and Doug and Renee Lambrecht were awarded the funds earlier this month. The awards range from $2,500 to $5,000. – Sylva Herald, October 23, 2008

Amanda Sizemore grew up on a dairy farm in Fletcher, N.C. After graduating with a degree in horticulture from Clemson University, she set out on a career of helping farmers, first with the USDA, then the North Carolina State University Cooperative Extension System. – Southeast Farm Press, Wednesday, August 20, 2008

Sorghum syrup once flowed like creek water in the Southern Appalachians, and there are signs that this ultimate slow food  may be flowing again. With help from the state, several local farmers have revved up production of the rich, old-fashioned syrup. – Mountain Xpress, August 15, 2008

When Ron and Cheryl Searcy returned to their family farm near Horse Shoe, N.C., they had a number of crop and livestock options in mind – none of them involved goats. – Southeast Farm Press, Wednesday, November 5, 2008

Western North Carolina was among the Southeast’s hardest hit areas by drought in 2006-2007. Thanks to some forward thinking stream restoration work the rains that have somewhat alleviated the drought didn’t go to waste. – Farm Press, Wednesday, October 1, 2008 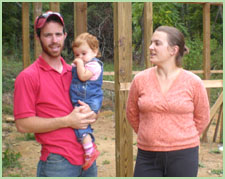 “This program has been a blessing and an education. I had no idea of any resources other than the few farmers in the area. The resources provided by this grant have been excellent!”

“This grant has allowed me to transition from small-scale ‘hobby’ farming to a production/income producing level. I have been able to turn overgrown unused land into pasture for my goat production.”

The WNC Agricultural Options Program awarded 42 farmers seed grants totaling $225,000 last month to assist them in completing farm diversification projects. This year’s grantees are selling Appalachian Grown meats at the WNC Farmers Market at Asheville; creating alternative markets for established strawberry, trout and edible landscaping enterprises; and introducing innovative crops to the region such as milkweed for sale to butterfly farmers and mosses for landscapers.

2008 – Awards totaling $675,000 over a three-year period will be granted to western NC farmers. The grant will be provided by the N.C. Tobacco Trust Fund Commission, which will partner with Rural Advancement Foundation International (RAFI) and the WNC Agricultural Options program to accept applications and monitor the recipients’ projects. Current and former tobacco growers are the primary audience for the program; however, any farmers living in tobacco dependent communities are eligible.

2008 – The Western North Carolina Agricultural Options Program recently awarded $5,000 to 23 area farmers and $2,500 to 14 farmers who are diversifying or expanding their operations. The grants offer incentive for farmers to try new ventures — encouraging the sustainability of their operation, as well as demonstrating new methods to the larger agriculture community. Published March 2008

BERRIES: The Next Cash Crop? Madison Couple Look to the Sweet Fruits

2005 – When it comes to cash crops in the mountains, for decades it’s been hard to beat burley tobacco. But Pam Zimmerman — armed with three acres of berries — is giving it a shot. – Asheville Citizen-Times, June 20, 2005.

The 2021 WNC AgOptions Grantees have been announced! Check back soon for a press release and more information on this year’s recipients! END_OF_DOCUMENT_TOKEN_TO_BE_REPLACED

The 2021 WNC AgOptions grant cycle is closed.   Please check back in early February for the list of the 2021 grantees! END_OF_DOCUMENT_TOKEN_TO_BE_REPLACED

Diversifying farmers in western North Carolina are receiving support to offset the risk of expanding and trying new ventures. WNC Agricultural Options awarded 40 farm businesses a total of $216,000 in $3,000 and $6,000 grants. Funded projects include one of... END_OF_DOCUMENT_TOKEN_TO_BE_REPLACED

The 2021 WNC AgOptions Grantees have been announced! Check back soon for a press release and more information on this year’s recipients! END_OF_DOCUMENT_TOKEN_TO_BE_REPLACED

The 2021 WNC AgOptions grant cycle is closed.   Please check back in early February for the list of the 2021 grantees! END_OF_DOCUMENT_TOKEN_TO_BE_REPLACED

2020 WNC AgOptions Informational Session via Zoom Tuesday, October 6, 2020 8 a.m. – 9:30 a.m. RSVP to agoptions@wnccommunities.org to get access information. You are invited to participate in an informational meeting about the WNC AgOptions grant program for growers... END_OF_DOCUMENT_TOKEN_TO_BE_REPLACED