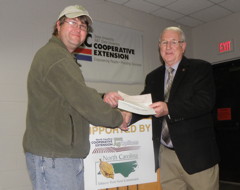 Jon is enhancing weed control methods on his 50-acre USDA Certified Organic vegetable farm with the purchase of a unique tool, the KRESS plastic finger weeder. The innovative tractor implement can be configured for either bare dirt or plastic mulch cultivation.

With this addition to the farm, more USDA grade 1 produce can be grown per acre so that less lower quality produce is sold at a big loss to conventional seconds markets. It also allows the farm to sell organic Chinese cabbage and other Asian greens, which are in high demand as they are difficult to grow organically on a large scale due to weed control issues.

“Successful organic weed control is the sum of all operations and cultural management,” Jon said. Reducing weed pressure not only ensures plants have enough nutrients, but also, some studies have proven, it reduces both insect damage and disease pressure.

Jon and his brothers, who are his business partners, limit weeds with the use of plastic mulch, crop rotation, soil fertility management, sanitation, good seed selection, cover crops and early season blind cultivation. “The last stage, in-row cultivation, is the final and often the most difficult part of our organic weed control strategy,” Jon said. “Once the weeds have become too large to mechanically cultivate, we have to resort to either hand-hoeing if there is time or we have to let the weeds go and hope for the best.”

“Due to our limited labor, on a farm this size we need to make sure every work hour is being utilized to the fullest,” Jon said.

The unique finger weeder tool bar just recently became commercially available in the United States. Jon said this unit is one of the first ones sold in this country. KRESS & Company has been supplying finger weeding cultivating equipment for more than 30 years to European growers with proven success, he said.

Miller Farms in Marble, established in 2012, is among the few organic farms in his county to show success as a large-scale organic produce farmer, and the only one of its size in that area. Jon attributes that success to “using the most efficient and effective equipment on the market as well as working with other organic growers in our region.”

Miller Farms primarily sells to Destiny Organics, a wholesaler in Atlanta, as well as with New Sprout Organic Farms in Asheville. They also sell to local produce stands in Cherokee and Clay County and routinely donate excess produce to MANA Food Bank in Asheville, Cherokee County Food Pantry in Andrews and Murphy, and Atlanta Food Bank. “Our main desire for the farm is to establish a sustainable organic farm for our family and community,” Jon said.

Although the 2021 grant cycle has just gotten underway, we are busy planning the details for next year. Please check back periodically for information about how to apply for 2022 — applications are usually released in late summer/early fall. In... END_OF_DOCUMENT_TOKEN_TO_BE_REPLACED

Farm grantees show resilience in the face of COVID WNC AgOptions grantees receive $219,000 for farm projects ASHEVILLE, N.C.—Farmers in western North Carolina are receiving support to expand, diversify and modify operations in the midst of a pandemic. WNC Agricultural... END_OF_DOCUMENT_TOKEN_TO_BE_REPLACED

The 2021 WNC AgOptions grant cycle is closed.   Please check back in early February for the list of the 2021 grantees! END_OF_DOCUMENT_TOKEN_TO_BE_REPLACED

Farm grantees show resilience in the face of COVID WNC AgOptions grantees receive $219,000 for farm projects ASHEVILLE, N.C.—Farmers in western North Carolina are receiving support to expand, diversify and modify operations in the midst of a pandemic. WNC Agricultural... END_OF_DOCUMENT_TOKEN_TO_BE_REPLACED

The 2021 WNC AgOptions grant cycle is closed.   Please check back in early February for the list of the 2021 grantees! END_OF_DOCUMENT_TOKEN_TO_BE_REPLACED

2020 WNC AgOptions Informational Session via Zoom Tuesday, October 6, 2020 8 a.m. – 9:30 a.m. RSVP to agoptions@wnccommunities.org to get access information. You are invited to participate in an informational meeting about the WNC AgOptions grant program for growers... END_OF_DOCUMENT_TOKEN_TO_BE_REPLACED