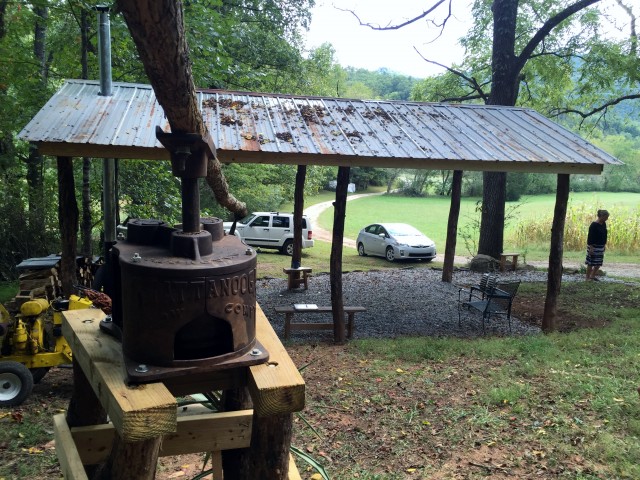 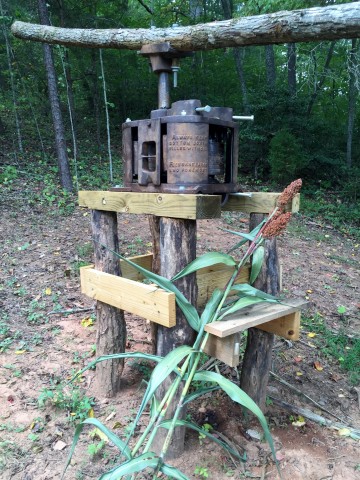 Warren and Diana have added a sorghum syrup processing facility to make syrup with sorghum that they are growing. The shed doubles as a produce packing area in the sorghum syrup off-season.

They have built a 10-foot by 20-foot shed with gravel floors and purchased an antique vertical cane mill to extract juice that is then cooked in a wood-fired 60 to 80 gallon cooker. They already have a draft horse and a tractor to power the mill.

“We have considered various options [for diversifying the farm] but quite by accident we believe we have discovered a product and a market for us that makes us unique and has already proven to be successful,” Warren said. 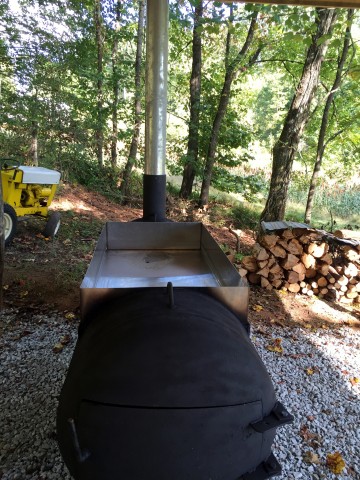 On a whim, he grew a patch of sorghum, and later found out he could process syrup at Doubletree Farm in Madison County. “After producing about four gallons, I returned to Franklin and immediately noticed our customers were enthralled with the process and the production of local syrup,” Warren said.

He then discovered he owned a sorghum seed plate for his horse-drawn antique Cole planter, which makes seeding much more efficient. He broke new ground and planted a larger patch of cane (as the crop is colloquially called in the local area), which generated a lot of interest among his neighbors. As did his farm’s display booth about sorghum-syrup-making at the local agricultural fair. 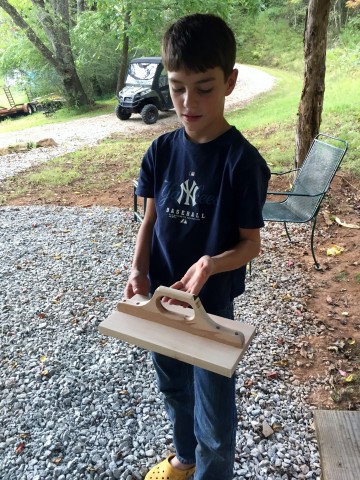 With the expansion, Warren can save costs by not driving 95 miles to Madison County for processing, as well as by keeping full profit rather than sharing with facility owners. Warren expects to produce a minimum of three 80 gallon batches of juice per year, and plans to draw customers who are interested in seeing the process in person.

Warren and Diana operate a 67-acre farm where Warren’s grandfather originally raised tobacco and cattle as well as another 23-acre farm south of town where his other set of grandparents lived. They’ve farmed cattle and corn since 1976, chickens since 2011, and tomatoes since 2014. Diana is a full-time farmer, managing production and marketing products at the Cowee Farmers Market and local stores.

Their son Clint is also excited about the farm. “My son has been an integral part of our operations and his business experiences and common work experience have benefited him greatly and are preparing him for the future,” Warren said. “He has already mentioned entrepreneurial plans to operate a farm-related business when he reaches the appropriate age. He is only 10.”

Although the 2021 grant cycle has just gotten underway, we are busy planning the details for next year. Please check back periodically for information about how to apply for 2022 — applications are usually released in late summer/early fall. In... END_OF_DOCUMENT_TOKEN_TO_BE_REPLACED

Farm grantees show resilience in the face of COVID WNC AgOptions grantees receive $219,000 for farm projects ASHEVILLE, N.C.—Farmers in western North Carolina are receiving support to expand, diversify and modify operations in the midst of a pandemic. WNC Agricultural... END_OF_DOCUMENT_TOKEN_TO_BE_REPLACED

The 2021 WNC AgOptions grant cycle is closed.   Please check back in early February for the list of the 2021 grantees! END_OF_DOCUMENT_TOKEN_TO_BE_REPLACED

Farm grantees show resilience in the face of COVID WNC AgOptions grantees receive $219,000 for farm projects ASHEVILLE, N.C.—Farmers in western North Carolina are receiving support to expand, diversify and modify operations in the midst of a pandemic. WNC Agricultural... END_OF_DOCUMENT_TOKEN_TO_BE_REPLACED

The 2021 WNC AgOptions grant cycle is closed.   Please check back in early February for the list of the 2021 grantees! END_OF_DOCUMENT_TOKEN_TO_BE_REPLACED

2020 WNC AgOptions Informational Session via Zoom Tuesday, October 6, 2020 8 a.m. – 9:30 a.m. RSVP to agoptions@wnccommunities.org to get access information. You are invited to participate in an informational meeting about the WNC AgOptions grant program for growers... END_OF_DOCUMENT_TOKEN_TO_BE_REPLACED