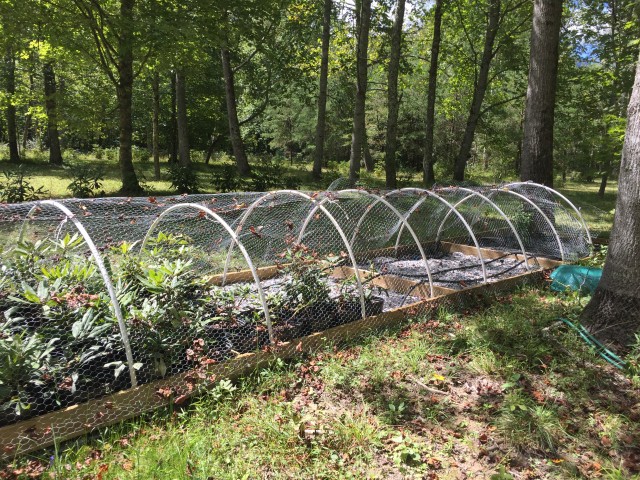 Expanding Markets and Increasing Manageability and Sales of Native Azaleas

Bill has made critical changes at his nursery to sell off his current inventory of field-grown azaleas, which are mostly native to other parts of the Southeast, and start container-grown azaleas native to Western North Carolina. Many of his plants are native to Florida, Pennsylvania and the piedmont of North Carolina and have root balls that weigh up to 100 pounds. He’d rather offer plants that local customers have expressed interest in.

“The sale of existing plants will allow the nursery to change tracks so that locally desirable container grown native azaleas will replace field grown plants that are native elsewhere,” Bill said. “People will be able to purchase the container plants at markets and put them in their cars, thereby broadening the number of potential buyers. The plants will be available for sale for an extended time during the year, and the plants will be more likely to survive when planted in the landscape.”

Bill has about 1,000 azaleas that range in height from three feet to eight feet. They have found homes in Asheville Botanical Gardens, The Ramble in Biltmore Holdings, Crow Fields, Calloway Gardens, Central Park in New York City and the Biltmore Estate in Asheville NC. To move out his current inventory, he is increasing his advertising using direct mail to landscapers and landscape architects, websites, and magazine advertisements, such as The Plant Locator.

Bill has unique varieties such as Rhododendron austrinum (Florida flame azalea), R. pennsylvania, R. serrulatum (swamp azalea), and various cultivars. He also has azaleas native to Western North Carolina, such as flame azaleas, Rhododendron aborescens (smooth or sweet azalea) and Rhododendron vaseyi (pinkshell). He has five acres of azaleas and rhododendrons, which he started in 1987. His goal is to supplement his income during his retirement.

The 2021 WNC AgOptions Grantees have been announced! Check back soon for a press release and more information on this year’s recipients! END_OF_DOCUMENT_TOKEN_TO_BE_REPLACED

The 2021 WNC AgOptions grant cycle is closed.   Please check back in early February for the list of the 2021 grantees! END_OF_DOCUMENT_TOKEN_TO_BE_REPLACED

Diversifying farmers in western North Carolina are receiving support to offset the risk of expanding and trying new ventures. WNC Agricultural Options awarded 40 farm businesses a total of $216,000 in $3,000 and $6,000 grants. Funded projects include one of... END_OF_DOCUMENT_TOKEN_TO_BE_REPLACED

The 2021 WNC AgOptions Grantees have been announced! Check back soon for a press release and more information on this year’s recipients! END_OF_DOCUMENT_TOKEN_TO_BE_REPLACED

The 2021 WNC AgOptions grant cycle is closed.   Please check back in early February for the list of the 2021 grantees! END_OF_DOCUMENT_TOKEN_TO_BE_REPLACED

2020 WNC AgOptions Informational Session via Zoom Tuesday, October 6, 2020 8 a.m. – 9:30 a.m. RSVP to agoptions@wnccommunities.org to get access information. You are invited to participate in an informational meeting about the WNC AgOptions grant program for growers... END_OF_DOCUMENT_TOKEN_TO_BE_REPLACED