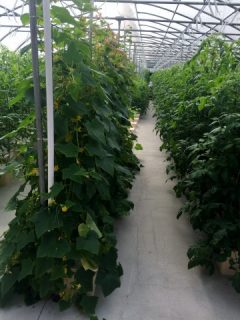 John and his father James added a back-up generator to their existing 3,600-square-foot hydroponic greenhouse to deter crop loss during power outages. They are also purchased a mini-fogger for more efficient pest control. 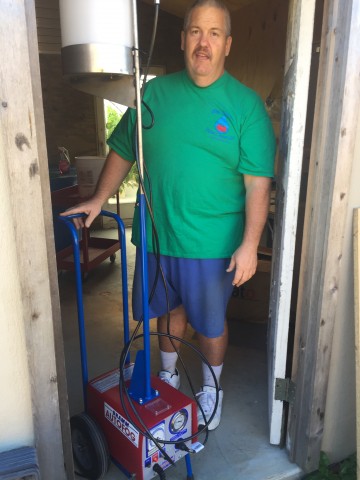 John and James produce 15,000 pounds of hydroponic tomatoes annually. The operation relies heavily on electricity to run its heating, ventilation and irrigation systems. John said the backup system is critical to ensure an uninterrupted presence in the marketplace during power outages and therefore a continued stream of income.

The mini-fogger dramatically decreased labor time in spraying pesticides and fungicides—what takes hours can now be completed in minutes. The mini-fogger also lowers the amount of chemicals needed for pest control. It has a timer, so John can set it up and leave the greenhouse for the day, reducing his exposure to chemicals.

Hydroponic operations are rare in Cleveland County. John offers field days for local students and sets up a farm booth at the county fair demonstrating how the hydroponic farm works.

“I can provide quality fresh vegetables throughout the winter on my hydroponic tomato farm,” John said. “This gives my family and myself food to eat and income from the sale of my products to our community. I also donate the utility vegetables or seconds to the church I grew up going to as a kid.”

The Carroll’s farm was formerly a dairy farm, from 1960 to the 1980s. They have offered mushrooms and produce since 2009, and hydroponic tomatoes since 2014, which now result in 90 percent of the farm’s income. John markets online through Green Creek Farm, as well as to farmer’s markets; to stores such as Food Matters and Ora Supermarket; and to a few local restaurants.

The 2021 WNC AgOptions Grantees have been announced! Check back soon for a press release and more information on this year’s recipients! END_OF_DOCUMENT_TOKEN_TO_BE_REPLACED

The 2021 WNC AgOptions grant cycle is closed.   Please check back in early February for the list of the 2021 grantees! END_OF_DOCUMENT_TOKEN_TO_BE_REPLACED

Diversifying farmers in western North Carolina are receiving support to offset the risk of expanding and trying new ventures. WNC Agricultural Options awarded 40 farm businesses a total of $216,000 in $3,000 and $6,000 grants. Funded projects include one of... END_OF_DOCUMENT_TOKEN_TO_BE_REPLACED

The 2021 WNC AgOptions Grantees have been announced! Check back soon for a press release and more information on this year’s recipients! END_OF_DOCUMENT_TOKEN_TO_BE_REPLACED

The 2021 WNC AgOptions grant cycle is closed.   Please check back in early February for the list of the 2021 grantees! END_OF_DOCUMENT_TOKEN_TO_BE_REPLACED

2020 WNC AgOptions Informational Session via Zoom Tuesday, October 6, 2020 8 a.m. – 9:30 a.m. RSVP to agoptions@wnccommunities.org to get access information. You are invited to participate in an informational meeting about the WNC AgOptions grant program for growers... END_OF_DOCUMENT_TOKEN_TO_BE_REPLACED