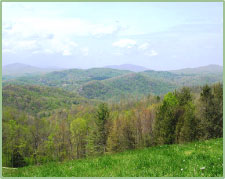 Amanda Sizemore grew up on a dairy farm in Fletcher, N.C. After graduating with a degree in horticulture from Clemson University, she set out on a career of helping farmers, first with the USDA, then the North Carolina State University Cooperative Extension System.

“After a few years, my husband was working in a manufacturing plant and hating it. I was helping other farmers make a profitable living and wondering why I shouldn’t be applying this same information to my own farm,” she says.

So, she quit her university job and went back to the family farm and began an organic vegetable farming operation of her own. Last year Jeremy quit his job and became the unofficial farm engineer. They now grow 20 acres of vegetables on the family farm in Fletcher, N.C., and loving the independence of it all.

“We wanted our children to grow up in a similar environment that I had growing up on the farm. And, we wanted to find a way to keep the farm that’s been in our family for over 100 years in production — that’s hard to do with a dairy farm,” Sizemore says.

Amanda started out with a 2.5 acre farm, selling most of her produce at an on-site market. The second year they advanced to five acres and concentrated more on selling wholesale, sticking with all organics. Now, it is a full-time effort. We will begin harvesting in early May. This year they will plant July 10, Aug. 1, Aug. 7 and Aug. 16 for their fall crops.

The five acre operation worked well enough to expand to 20 acres, allowing Jeremy to quit his manufacturing job, completing the family move back to the farm.

This year they certified another five acres, so there is some room for expansion. They also put in a hot tunnel to allow them more year-round production and expanded a cooler they originally financed with a grant from western North Carolina’s Ag Options program.

The Ag Options Program started in 2004 as part of the Tobacco Buyout Program and is financed through the N.C. Tobacco Trust Fund Commission. The grant, Amanda says, allowed them to build a cooler the first year of their business and to open their retail market. From that small acreage start, they have expanded, keeping all their acreage in the high profit organic business.

The hot tunnel is a new concept that provides heirloom tomatoes, in particular, with a headstart and more favorable growing conditions. The high value heirlooms, especially the highly desirable (by consumers) Cherokee Purple variety lack the vigor and disease resistance of commercial tomato varieties.

Heat tunnels can give growers the ability to start crops earlier in the spring and grow them later in the fall. When used in conjunction with row covers, high tunnels can provide up to 15 degrees F protection at night, and tomatoes can be planted 30 days prior to typical frost-free dates without the use of energy-intensive furnaces.

Early crops will generally bring higher prices at local markets, and give growers an edge in attracting customers who may be loyal for the rest of the season.

Another advantage of heat tunnels is protecting crops from wind, rain and hail damage. Severe rainstorms in which several inches of rain fall in a day or even over the course of several hours, damage plants and can cause severe fruit cracking.

In addition to the tomatoes grown in the heat tunnel, the Sizemores grow four other varieties of tomatoes, pepper, eggplant, broccoli, red leaf, green leaf and Romaine lettuce, squash, zucchini and cucumbers. They increased the size of the cooler they bought with the help of their Ag Options Grant, which will allow them to plant late season tomatoes, pick the crop green and chill the fruit for fall sales.

The next step is to put in a greenhouse to grow their own cuttings, giving them crops nearly year-round.

They start heirloom tomatoes in the heat tunnel in early April and continue to harvest until October.

Winter is marketing season for the Sizemore’s. They spend the bulk of their time in their off-season attending meetings and making contacts with current and potential customers. Being a small operation, and a little off the beaten path by growing only ornamentals, they have built a strong customer base, which has allowed them to increase the size of their operation and the diversity of the crops they grow.

“We spend a lot of time with the customers to whom we sold produce the previous year. We want to know what crops were most profitable to them how much of each crop they hope to sell the following year. Based on that input, we plan how many acres of each crop we will plant during the growing season,” Amanda explains.

“Everybody wants a piece of the pie with organics. The outrageous input prices that conventional growers have are even higher for organic producers,” she adds.

One of the biggest organically acceptable products, fertilizer, comes from the dairy farm. “A combination of compost and manure provides at least half our fertilizer, which cuts our cost some, but spreading costs thanks to high diesel prices offsets some of the advantages from dairy,” she notes.

Most production practices for organic vegetables are the same as conventional products. Drip tape for irrigation and plastic row covers are the same. The only real difference is that they plant red winter wheat or barley in the row middles for weed control and to help with soil erosion. They mow the wheat rows once a week, which sometimes works and sometimes doesn’t.

At 21 days they pull weeds on all the acreage. That makes labor a big challenge and makes staying smaller a benefit.

They use a three-year rotation and are looking at expanding to a four year rotation as the farm grows. Being organic, Amanda stresses, they have to stay away from nematode problems, or any production problems that limit yield or quality.

Jeremy is an engineer and a natural tinkerer and has been able adapt some of the equipment from the dairy. They have been able to purchase some of the other equipment needed to operate a small farm.

Amanda is one of nine children and says watching her father work 12 hour days routinely and doing some of that work herself gives her a good appreciation of hard work. “Most of my brothers and sisters live in the area and work with us on the farm when we need them — it’s been a good thing.

The quality of life, despite the long hours and the uncertainty of running a small farming operation, has been good for the Sizemore’s.

“We get to see our children and our family. And, so far the organic farm has worked out well. We have to grow slowly, but we feel we have a good base and we’re optimistic about the future,” Amanda says.

The 2021 WNC AgOptions grant cycle is closed.   Please check back in early February for the list of the 2021 grantees! END_OF_DOCUMENT_TOKEN_TO_BE_REPLACED

Diversifying farmers in western North Carolina are receiving support to offset the risk of expanding and trying new ventures. WNC Agricultural Options awarded 40 farm businesses a total of $216,000 in $3,000 and $6,000 grants. Funded projects include one of... END_OF_DOCUMENT_TOKEN_TO_BE_REPLACED

The Year-End Dinner was held on November 8th, 2019 at the Addison Farms Vineyard, a 2019 WNC AgOptions grantee.. Over 50 people were in attendance, including representation from 18 of the 39 projects, members of Cooperative Extension, WNC Communities and... END_OF_DOCUMENT_TOKEN_TO_BE_REPLACED

The 2021 WNC AgOptions grant cycle is closed.   Please check back in early February for the list of the 2021 grantees! END_OF_DOCUMENT_TOKEN_TO_BE_REPLACED

2020 WNC AgOptions Informational Session via Zoom Tuesday, September 08, 2020 5:00 p.m. – 6:30 p.m. RSVP to agoptions@wnccommunities.org to get access information. You are invited to participate in an informational meeting about the WNC AgOptions grant program for growers... END_OF_DOCUMENT_TOKEN_TO_BE_REPLACED