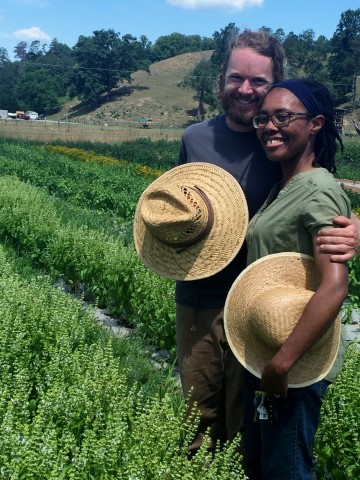 Michael and Lauren have expanded their production of field basil to keep up with customer demand. To do so they made major improvements to their growing system to better control downy mildew, protect plants from spring frosts, and increase labor efficiencies. They transitioned to growing plants on black plastic and paper mulch, using drip irrigation with a fertilizer injector to minimize splash on leaves. They also purchased an implement for their walk-behind tractor so they can make their beds efficiently. 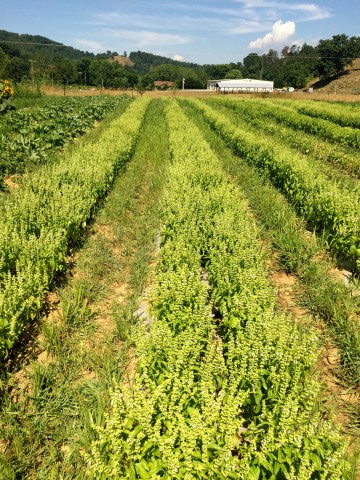 In addition, they have installed a second cistern to capture overflow from the home’s spring, piping and drip tape. They purchased more storage racks, wash/storage bins, harvest totes, and a commercial food dehydrator so they can dry basil and sell it in the off season, deriving farm income during winter months.

Wicked Weed Brewing in Asheville is one of their main customers. In addition to basil, they grow strawberries, blueberries, elderberry, mint, lavender, pumpkin, winter squash, popcorn, garlic, potatoes and sweet potatoes. They also offer a U-pick patch for pumpkins.

Michael has found that he likes selling herbs. “They are relatively easy to maintain and harvest, sell for a good price, and allow for multiple harvests from one plant,” he said.

He and Lauren bought the Barnardsville farm in 2013, fulfilling Michael’s life-long dream of farming. They both studied agriculture in school and have pursued related professions. “Returning to farm life after parents and grandparents sold off family land is something that we both value,” Michael said.

Diversifying farmers in western North Carolina are receiving support to offset the risk of expanding and trying new ventures. WNC Agricultural Options awarded 40 farm businesses a total of $216,000 in $3,000 and $6,000 grants. Funded projects include one of... END_OF_DOCUMENT_TOKEN_TO_BE_REPLACED

The Year-End Dinner was held on November 8th, 2019 at the Addison Farms Vineyard, a 2019 WNC AgOptions grantee.. Over 50 people were in attendance, including representation from 18 of the 39 projects, members of Cooperative Extension, WNC Communities and... END_OF_DOCUMENT_TOKEN_TO_BE_REPLACED

Honey products from 2018 AgOptions grant recipient, Bee Naturally, can now be found at the gift shops for the Biltmore Estate and the Blue Ridge Parkway. Read the full article online at the McDowell News, Click Here   END_OF_DOCUMENT_TOKEN_TO_BE_REPLACED

Diversifying farmers in western North Carolina are receiving support to offset the risk of expanding and trying new ventures. WNC Agricultural Options awarded 39 farm businesses a total of $216,000 in $3,000 and $6,000 grants on Thursday at the Mountain... END_OF_DOCUMENT_TOKEN_TO_BE_REPLACED