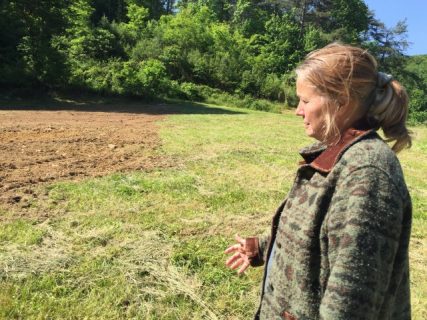 Susan is expanding her lamb meat venture, which she started with the help of a 2013 WNC AgOptions grant. She is renovating her pasture to better control barber pole worms in her animals as well as transitioning to a Dorper and Katahdin stock, which is expected to be more worm-resistant and have higher carcass yields than her current breed.

She is planting Sericea Lespedeza, a perennial legume that has shown to reduce barber pole worms in animals, improve soil health, and add protein content to the sheep’s diet. Susan is also planting the far end of her pasture as a wildlife buffer for foraging deer and wildlife, which also lessens worm populations.

“One of the biggest risks to sheep health in western North Carolina is the barber pole worm,” Susan said. “With the failure of many worming medicines due to overuse, it is necessary for ruminant farmers to seek out alternative ways in maintaining heard health and preventing worm infestation.”

Susan is also drill seeding a mix of cold and warm season high protein forage into her pasture. The improvements help her apply for a 100 percent Grass-fed certification. Brothers On Farm meat is non-GMO, since she does not feed corn to the sheep, as well as certified Animal Welfare Approved.

“With the addition of eight more ewes to our breeding program, a new worming pasture planted in Lespedeza, and drill seeding the remaining pastures in high protein grass forages, I feel that we will finally have the farm at a place of true sustainability and profit,” Susan said. By tripling production in 2016, she is closer to keeping up with demand. “Keeping product in stock has been our biggest issue,” she said.

Susan sells at the Blairsville, Georgia farmer’s market and to customers directly off the farm. She expects to soon offer full animals to nearby restaurants. See www.brothersonfarms.com.

Diversifying farmers in western North Carolina are receiving support to offset the risk of expanding and trying new ventures. WNC Agricultural Options awarded 40 farm businesses a total of $216,000 in $3,000 and $6,000 grants. Funded projects include one of... END_OF_DOCUMENT_TOKEN_TO_BE_REPLACED

The Year-End Dinner was held on November 8th, 2019 at the Addison Farms Vineyard, a 2019 WNC AgOptions grantee.. Over 50 people were in attendance, including representation from 18 of the 39 projects, members of Cooperative Extension, WNC Communities and... END_OF_DOCUMENT_TOKEN_TO_BE_REPLACED

Honey products from 2018 AgOptions grant recipient, Bee Naturally, can now be found at the gift shops for the Biltmore Estate and the Blue Ridge Parkway. Read the full article online at the McDowell News, Click Here   END_OF_DOCUMENT_TOKEN_TO_BE_REPLACED

Diversifying farmers in western North Carolina are receiving support to offset the risk of expanding and trying new ventures. WNC Agricultural Options awarded 39 farm businesses a total of $216,000 in $3,000 and $6,000 grants on Thursday at the Mountain... END_OF_DOCUMENT_TOKEN_TO_BE_REPLACED