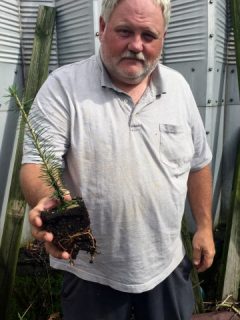 Rodney is producing Fraser Fir transplants for his Christmas tree farm, growing them in containers instead of using the traditional lineout bed method to deter root disease. Root disease has been common in the area following the heavy hurricane rains of 2004. Farmers have had to depend on nurseries in other regions to produce Fraser fir seedlings. 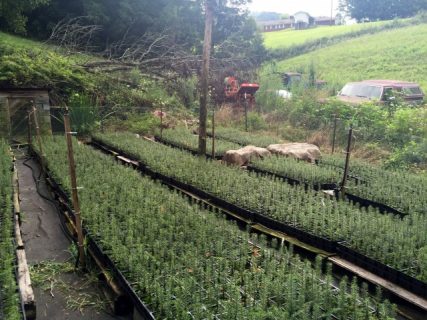 “This project will overcome that problem by allowing us to grow the seedling in a disease-free soilless media,” Rodney said. “The project will allow the farm to have a dependable transplant source for years into the future.”

Rodney purchased plugs, or small seedlings, and then transplanted them into containers with a soil-less mix. He then places them on pallets to allow air circulation to promote root pruning. The pallets sit on top of geo-textile fabric and gravel to deter weed growth and allow drainage. He is setting up irrigation lines, through which fertilizer runs, as well as grow lights to improve growth rates. He then fences the area to deter wildlife damage.

Rodney expects to produce approximately 6,500 healthy seedlings per year, and plant about 5,000 on the farm. He plans to derive income from selling extra seedlings, offsetting the cost of production.

Rodney is tending land on which his father used to farm cattle, apples and tobacco in the 1950’s. The farm transitioned to Christmas trees over time. After graduating from N.C. State University in 1993 with a B.S. in Forest Management and pursuing off-farm employment for a few years, Rodney eventually returned to full-time farming October of 2000.

WNC Agricultural Options is now accepting grant applications from farmers diversifying or expanding their businesses. With funding from the N.C. Tobacco Trust Fund Commission, WNC AgOptions is distributing a total of $216,000 to western North Carolina farmers in 2021. The... END_OF_DOCUMENT_TOKEN_TO_BE_REPLACED

INFORMATION MEETINGS To participate in an information meeting via the Zoom platform, click on the below links for details. Not available on the dates below? Watch a recorded presentation below: RECORDED PRESENTATION Thursday, September 24, 2020 at NOON Tuesday, October... END_OF_DOCUMENT_TOKEN_TO_BE_REPLACED

Diversifying farmers in western North Carolina are receiving support to offset the risk of expanding and trying new ventures. WNC Agricultural Options awarded 40 farm businesses a total of $216,000 in $3,000 and $6,000 grants. Funded projects include one of... END_OF_DOCUMENT_TOKEN_TO_BE_REPLACED

INFORMATION MEETINGS To participate in an information meeting via the Zoom platform, click on the below links for details. Not available on the dates below? Watch a recorded presentation below: RECORDED PRESENTATION Thursday, September 24, 2020 at NOON Tuesday, October... END_OF_DOCUMENT_TOKEN_TO_BE_REPLACED