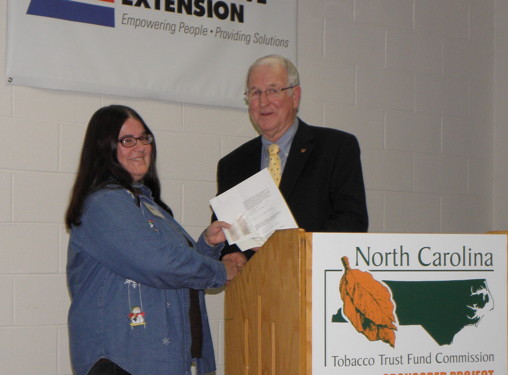 Kim is reintroducing farming to a dormant property with winter greenhouse shiitake mushroom production and the wild cultivation of goldenseal. She is constructing a solar heated greenhouse to extend the season to produce shiitakes during winter months when potential exists for higher market prices. She is also purchasing goldenseal rhizomes and a cultivator to begin production of the medicinal herb.

The solar heated greenhouse is in a part-sun part-shade area and has a shade cloth to create the 80 to 90 percent shade that mushrooms require. Solar panels are against a steeper sunny slope behind the greenhouse. Kim is inoculating 360 oak logs with shiitake mushroom spawn and stacking part of them in a nearby stream for summer production. She projects she’ll produce 912 pounds for one and a half years from the outdoor and greenhouse areas. She is intensively managing the goldenseal to produce approximately 23 pounds of dried root per 400 square-foot beds.

Kim is part of a new grower-owned company called BotaniPharm, which involves 15 growers in North Carolina, Georgia, Tennessee and Alabama. Kim will be paired with a goldenseal mentor in a nearby county.

Kim involves 4-H youth in both the shiitake and goldenseal projects so they can “have first hand knowledge of the widespread impact sustainable agricultural products have on our health, economy, and our futures,” she said.

WNC Agricultural Options is now accepting grant applications from farmers diversifying or expanding their businesses. With funding from the N.C. Tobacco Trust Fund Commission, WNC AgOptions is distributing a total of $216,000 to western North Carolina farmers in 2021. The... END_OF_DOCUMENT_TOKEN_TO_BE_REPLACED

Diversifying farmers in western North Carolina are receiving support to offset the risk of expanding and trying new ventures. WNC Agricultural Options awarded 40 farm businesses a total of $216,000 in $3,000 and $6,000 grants. Funded projects include one of... END_OF_DOCUMENT_TOKEN_TO_BE_REPLACED