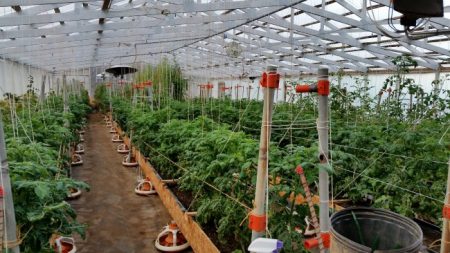 Paula and Dale are continuing a project they started with a 2016 WNC AgOptions grant, converting their 500-foot former poultry house into an aquaponics greenhouse. After ending their 13-year contract with poultry growers, they are transitioning to growing vegetables and tilapia.

In 2016 they refurbished 100 feet of the house, giving it a trial run by growing 600 cherry tomato and 600 assorted color bell peppers in soil. Satisfied with the vegetables’ quality, they are now converting the remaining 400 feet of the house and establishing the aquaponics system. They are building a bio-filter system, creating fish tanks out of former feed silos, and then connecting the fish tanks to the bio-filter. 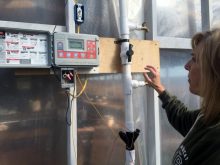 In an aquaponics system, vegetables and tilapia grow in symbiosis as fish provide fertilizer with their waste for the hydroponically grown vegetables. The savings in fertilizer produced off-site is significant. 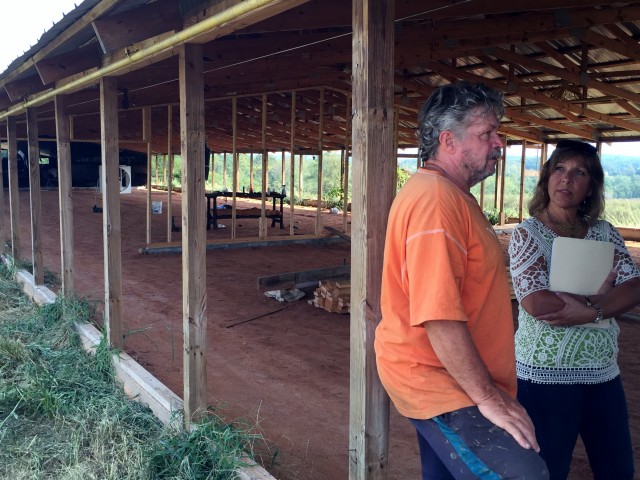 Paula has established relationships with several vendors, including Hickory grocery stores, Food Matters Market and Galax Food Stores; a wholesale client, Gene’s Produce in Conover; and a Hickory restaurant, Market on Main. They also sell direct to the public at a farmer’s market and donate excess produce to soup kitchens.

When discussing the next direction for the farm, Paula said Dale wanted to honor his father Jim Boles, who bought the 34 acres more than 50 years ago. “It was [Dale’s] desire to leave something worthwhile to his sons and to leave a legacy for our grandson, Eli,” Paula said. “I think Jim would be very proud to see how we have preserved and protected what he entrusted to us and to know that his great-grandson is now toddling around on the farm.”

The 2021 WNC AgOptions grant cycle is closed.   Please check back in early February for the list of the 2021 grantees! END_OF_DOCUMENT_TOKEN_TO_BE_REPLACED

Diversifying farmers in western North Carolina are receiving support to offset the risk of expanding and trying new ventures. WNC Agricultural Options awarded 40 farm businesses a total of $216,000 in $3,000 and $6,000 grants. Funded projects include one of... END_OF_DOCUMENT_TOKEN_TO_BE_REPLACED

The Year-End Dinner was held on November 8th, 2019 at the Addison Farms Vineyard, a 2019 WNC AgOptions grantee.. Over 50 people were in attendance, including representation from 18 of the 39 projects, members of Cooperative Extension, WNC Communities and... END_OF_DOCUMENT_TOKEN_TO_BE_REPLACED

The 2021 WNC AgOptions grant cycle is closed.   Please check back in early February for the list of the 2021 grantees! END_OF_DOCUMENT_TOKEN_TO_BE_REPLACED

2020 WNC AgOptions Informational Session via Zoom Tuesday, September 08, 2020 5:00 p.m. – 6:30 p.m. RSVP to agoptions@wnccommunities.org to get access information. You are invited to participate in an informational meeting about the WNC AgOptions grant program for growers... END_OF_DOCUMENT_TOKEN_TO_BE_REPLACED