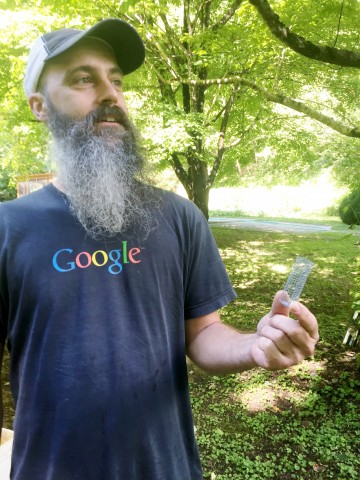 Robert and Jaime have added 20 new bee colonies to their 60-hive chemical treatment-free yard with the hopes of doubling honey production in the future. The additional colonies also strengthen the overall gene pool of their bees, ultimately helping boost bee survival.

Robert and Jaime currently use approximately half their hives for queen production rather than for honey. With the bee yard expansion, they have increased the number of hives devoted to honey extraction. 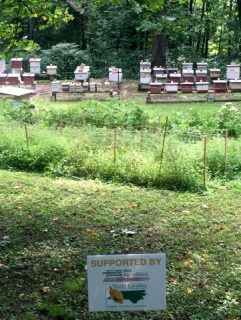 Since the farm is in a remote location, surrounded by 192,000 acres of national forest land, Robert and Jaime want to produce enough drones (males that mate with the queen) to provide sufficient genetic diversity. That ensures a variety of traits: some bees provide honey, some produce pollen, and some produce surplus brood. The extra bee production also ensures that they are replacing overwintering losses, which they say is typically between 30 to 40 percent of hives nationwide. 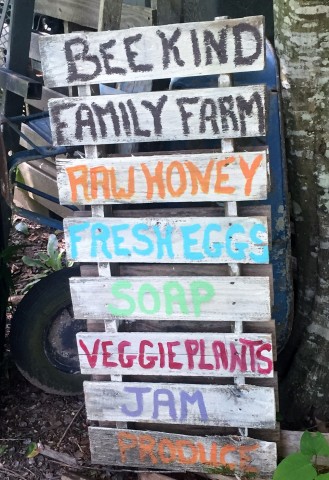 Robert and Jaime have not been able to keep up with the demand for their honey. They sell at Blowing Rock Farmer’s Market and the Hickory Farmer’s Market, off the farm, and at local stores. In addition to honey, they also sell handmade soaps and beeswax candles as well as a small amount of produce, eggs and mushrooms.

Their three acre farm started in 2010 with purchase of three hives. “Our farm has become an extremely important part of our daily lives on both a financial and personal level,” Jaime said. “We have come to know so many people in our community, both those involved in strengthening the local food system, and other farmers. We have enjoyed speaking to children and adults alike about beekeeping and the importance of honey bees.”

Diversifying farmers in western North Carolina are receiving support to offset the risk of expanding and trying new ventures. WNC Agricultural Options awarded 40 farm businesses a total of $216,000 in $3,000 and $6,000 grants. Funded projects include one of... END_OF_DOCUMENT_TOKEN_TO_BE_REPLACED

The Year-End Dinner was held on November 8th, 2019 at the Addison Farms Vineyard, a 2019 WNC AgOptions grantee.. Over 50 people were in attendance, including representation from 18 of the 39 projects, members of Cooperative Extension, WNC Communities and... END_OF_DOCUMENT_TOKEN_TO_BE_REPLACED

Honey products from 2018 AgOptions grant recipient, Bee Naturally, can now be found at the gift shops for the Biltmore Estate and the Blue Ridge Parkway. Read the full article online at the McDowell News, Click Here   END_OF_DOCUMENT_TOKEN_TO_BE_REPLACED

Diversifying farmers in western North Carolina are receiving support to offset the risk of expanding and trying new ventures. WNC Agricultural Options awarded 39 farm businesses a total of $216,000 in $3,000 and $6,000 grants on Thursday at the Mountain... END_OF_DOCUMENT_TOKEN_TO_BE_REPLACED